So far the Bored Jihadi has been primarily concerned with jihadi “high culture”, such as poetry, anashid, religious rituals and the like. But jihadis also do things that are mundane, cheesy, or just plain crude. I was reminded of this when reading this story about a trio of British IS sympathisers:

The men were obsessed with the murder of Lee Rigby and Nadir Syed described one of his killers, Michael Adebolajo, as a “diamond geezer”.

He also had an image of Adebolajo with the soldier’s dismembered body and other images of beheading victims and suicide bombers on his phone. […]

The court heard that Yousaf Syed had called his cat “7/7” while Nadir Syed had “77911” as the pin code on his mobile phone, which he bragged to police over.

Jurors were shown a video of the Syeds standing in a street and stamping on a poppy as they giggle and smirk. One of them says: “May the poppy go to hell inshallah”.

There are obviously lots of other examples of jihadi low culture, ranging from the harmless, such as the obsession with cat pictures and western sweets, to the truly vicious, like playing football with severed heads and taunting executed gays. I have the distinct impression that there is more of this kind of lumpenjihadism nowadays than back in the 80s and 90s. But maybe it’s just me getting old and nostalgic.

PS: I couldn’t find a picture of “7/7″ but here’s “Lucy” sitting inside a suicide belt. 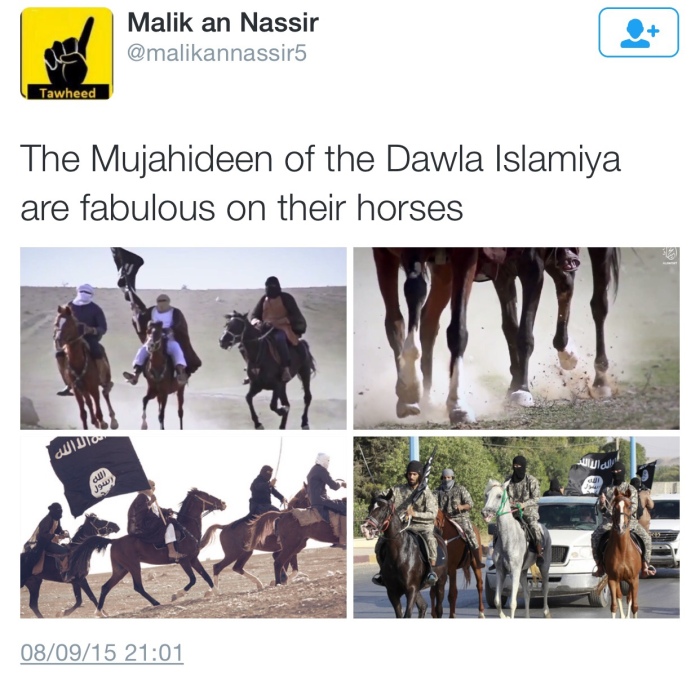 Birds of Islamic State: An IS fighter with a hawk on his shoulder and an IS member petting a parrot. IS tweeps also don’t seem to get enough of this video (http://youtu.be/6bJpwD_LNjs) of a parrot doing dhikr (religious invocations).